Oversimplifying only a little, the right in Western politics is generally about individuality, from self reliance at the better end to selfishness and greedy at the worse. The left is about collectivity or concern for others, from solidarity and compassion at the better end to compulsion or subjugation to the common cause. Both ends of the conventional spectrum can result, at their worst, in cruelty, fundamentalism or totalitarianism.

But this suggests that we should classify political positions not in one dimension – the usual left-right spectrum – but in two. 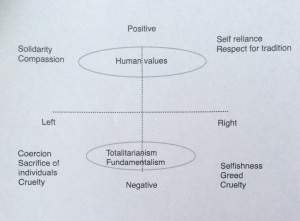 We could thus look at politics derived from human values as superseding the old left-right divisions. In fact, left and right define a dimension which is not the critical dimension for human flourishing at all and arguably never was. Both left and right have their positives but also their negatives, the latter making them almost indistinguishable at the worst extreme. The important dimension lies on another axis entirely.